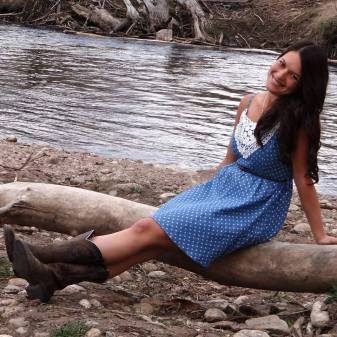 It’s difficult to introduce Kristin Jordan without making this sound like a dating ad: She dances to swing and blues, she hikes, she mountain bikes, rock climbs, rides horses and hunts. She also travels the world as part of her job as field engineer for Siemens. She’s got the know-how to manage whole groups of guys, and the skills to do it tactfully. She’s been with Siemens for 2.5 years and plans on staying with them until the 5-year mark. She says the routine isn’t great, but she’s learning a lot and she loves her job.

I am technically a field engineer for Siemens, but every once in a while on my business cards someone jokes around and puts “Vibration and Lube Specialist for Siemens.”

I work in a specialty department in which I do a lot of vibration work: Balancing, vibration investigation and I work with all the valves and lube oil systems and I do a lot of testing on those too.

Pretty much I travel around the world going to power plants. I normally work with natural gas, but every once in awhile I work with nuclear power and coal. Natural gas is becoming my specialty as I learn comission. A lot of the control systems are used in the units to get them going.

My favorite place has been New Foundland Canada. [The people] actually didn’t really like the manager at that job a lot, but they liked me, so I became the communication for the customer in my company.

My background is in the oil field. I interned with Clayton Williams in Midland, Texas for awhile. That’s soul Texas. The guy that tried to run for mayor of Texas and pretty much ran like Donald Trump back in the day. It didn’t work back in the day. He actually really reminds me of him. Crazy cowboy kind of rough and tough just ran his company like a crazy person, but a really hilarious man, and even though he said a lot of racist comments, he still treated me as an equal engineer, gave me a lot of opportunity and a lot of jobs, and never treated me differently in meetings. But his comments make you think differently. A really good man to work for, but if you just knew him on the surface, you’d think, oh my gosh that man’s crazy.

[I] worked in the oil field for awhile, I really liked it, that’s where my career was going and my dad also owns an oil company, so I already had a foot in the door there too, because he knows everyone; he’s a network king. As the oil field started to die, I ended up getting an intership at Excel Energy at a coal power plant in Hayden, Co. I started taking welding classes, and welding a lot more, and that was fun. I’m a really hands-on kind of engineer, so if my guys are doing something for me and I don’t really understand and they have this question, like oh I need this tool, how do I know what inventory you need before and after a job, and when you run out of things when you’re going to. I try to learn all their jobs and do them at least once or twice so I know what they need, and also so I know when they’re bullshitting me or lying to me. So it goes both ways—I can help them, and also I can keep them straight.

My least favorite part of the job is having albsolutely no routine ever. Most jobs are just start the unit—who knows when that is, 2 in the morning or 5 in the afternoon, no idea!–you’ll figure it out the day you get there. You have no idea how long you’re going to be at work. Sometimes you’re there only four hours, sometimes you’re there 16 hours. Sometimes when you’ve been there long enough you kind of know what the schedule’s going to be like, but then the grid or something will screw everything up and everything will change. Whatever you planned, plan to get it ruined. And then at home I’m on call 24/7, so I could get called Sunday afternoon and travel tomorrow.

(She coughs) Which leads to poor immune system. (She’s been coughingall day.) Allergies have been intense.

Right now I live in Fort Worth, Texas in my parent’s house, but they’re not there all the time, so they asked me to move in to help with rent. I also have a lot of family nearby—my cousins, a soccer game when I’m in town. But once again, half the time I’m like, oh I can do the soccer game tomorrow, and then I’m like, just kidding, I’ve got to go to Connecticut or Massachusetts. Or Argentina, because I really love getting that phone call. Not really—that’s like my least favorite place to work ever.

(Argentina) I think the biggest thing is the diet change. My diet does not include any salt and butter, because I just don’t eat it, don’t like it. Healthy diet isn’t really possible, because it’s really hard to be healthy on the road all the time. I don’t eat very much cheese or bread either, but I eat a lot of meat. But the meat is saturated in salt and butter. So after about two weeks, the diet change is really hard on my body. I found this vitamin regimen that really helps with it, so I haven’t been throwing up in Porta Potty every day.

Argentines don’t like slowing down their language and they don’t like listening to dumbed-down Spanish. And women are treated differently there. There’s nowhere in Argentina I feel comfortable as a female walking around by myself. I [typically] travel by myself, [but] I rarely go anywhere there. No one at the hotel speaks English. And you just get really isolated. I’ve been there almost three months this past year.

I do a lot of different things, but right now it comes down to two major things: A lot of times it’s balancing, which is pretty much your fan’s unbalanced, you’ve got to cure the wobbling and you’re like oh my gosh it’s driving me crazy. If it’s wobbling on the left, you put a weight on the right kind of thing, so you’re adding weight to rebalance it out, so now your fan’s fixed. And then with a very large shaft. I do that a lot; it’s just taking a lot of data, calculating balance move, and putting that weight in the shaft. Rotating shafts, you know. They vibrate sometimes, and I’ve got to control them. Collecting data and setting up a lot of probes and wires and running cables all over the machine. That’s pretty easy, and it can be time-consuming or not, depending on what’s going on. If the plant’s got their life together it’ll be pretty quick. If you’re in Argentine, a three-day job will be a 33-day job and you’ll pull your hair out because of the insanity. And the amount of sabotage there is also really crazy. They get more work out of it.

(Her watch beeps and we both look down at it.) It’s all beat shit up. I’ve eaten out on my mountain bike way too many times.

I love the job. The travel is kind of rough. The season’s usually spring and fall, so if I could find a teacher (boyfriend) they’re working, I’m working, I’ll just be gone, and summers and winters we have off [together], it’ll be perfect.