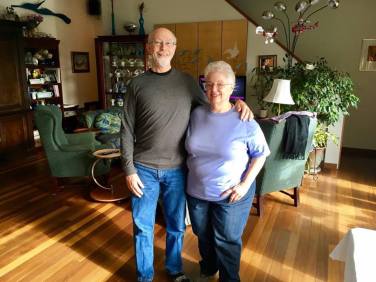 Sheila Oranch is a woman who knows what she wants, and one of those wants is to help people thrive. That’s part of the reason why she and her husband, Bill Powers, decided to start Coppertoppe Inn 13 years ago. Although their bed and breakfast has only four rooms, the house is enormous, the views are breathtaking, and the couple do everything they can to take care of their guests. I stayed at Coppertoppe last November with my boyfriend, and again just before this interview in September. What I remember most from our first stay (aside from the great lengths that Sheila and Bill took to make us comfortable) was my boyfriend talking about his musical passions, and Sheila telling him that he needs to go out and make it work—she told him that if he talks to people and offers some kind of compensation, not necessarily money, then he will find studio space to practice. I interview Sheila not in the spacious dining room at Coppertoppe, but in the cramped office downstairs.

And yes, we’ve been married for almost 37 years. Well, he didn’t want to change his last name when we got married, so I let him keep it. (lips tipping toward a smile.) We create a serene luxurious retreat where guests are pampered and appreciated so they can relax and get centered and go back to their regular lives making better choices. And this is our contribution to world peace, one person at a time. It’s a large modern house built by an unusual family. The wife is an artist with an architect’s license, the husband is a rich, paranoid, self-indulgant person, and they built a beautiful house with 10-foot ceilings and Indonesian Mahogany floors and baseboards and wall frames and everything because they had a lot of mahogany. It has a copper roof, which is why it’s called coppertoppe. It has marble bathrooms and it’s all fronted with sliders and picture windows facing the lake and the mountains, because they were all about the view. It’s way more house than we personally need, and we figured that if we made it a bed and breakfast, people would come and help us pay the mortgage.

We opened in Spring of 2004. We closed on the mortgage in March, we had beta customers in May, and then we had real paying customers in June. The most important thing that we do is our guest information questions, where we ask people what they like or don’t like for breakfast or snacks. What’s their favorite thing when they go out for brunch—what would they order? What’s something they’ve always wanted to learn how to cook and couldn’t figure it out, or they were afraid to try? And what size they are for robes and slippers, what kind of pillows they like. Some people think that’s very unusual, but pillows can be skinny, medium, fat, foam, feather, fiber, bulky, not bulky. There are a lot of choices. I know I’m fussy about my pillows, and we have a whole pillow library.

We have an actual library [too].

We ask people what their favorite colors are, and what kind of flowers they don’t like and what kind of entertainment they prefer, what kind of music, movies, games, puzzles, because we’re trying to get to kow them well enough to customize their visit as much as possible. How can we thrill you if we don’t know what you like?

It does make sense but it is not very often in this world that someone actually just wants to give you what you like instead of what they want to give you.

[Before Coppertoppe] I was doing wealth counseling, advanced estate planning, helping self-made millionaires to excavate and articulate their life purpose. (When asked if there was any connection between her former job as estate planner and Coppertoppe Inn, Sheila laughed and said, “No, we jumped ship.”)

Bill is an IT guy and he was one of three people supporting more than 250 users in an industrial metal powders company. He pretty much created the computer department there. He’s still doing technology consulting, remote manage services, and I can’t afford to have him making beds and cleaning toilets anymore. I don’t either, hardly at all.

We had eliminated our consumer debt and we had an online shopping business as well as consulting. When his company offered the package we decided to see if we could make it on our own. So at age 55, we quit our jobs. We’re two months apart. October and December. I’m a sagittarius on the cusp with capricorn. He’s a solid libra. I vacillate between being an enthusastic public speaker, trainer and networker, and crawl back in my hole and pull it in after me after a few days.

[My favorite part of running Coppertoppe is] meeting all of these interesting people from all over the world and having fascinating breakfast conversations.

The obvious [retreats we’ve had]: Quilters, scrapbookers, yoga retreats, we have a college group that’s still coming back after about 11 years. We had one that was interesting. It was a silent retreat, and nobody was allowed to talk, or write or communicate by body language in any way, unless it was an actual need, in which case they could write a note. Most of the time when we’re serving breakfast to 20 or so people, people will be commenting about the food, and we can ask them, is that how you like it? But these people were not allowed to communicate in any way. All we knew was they were eating their food. It’s a particular kind of discipline, it’s a spiritual discipline to have a silent retreat.

There was one gentleman, about 2:00 on Saturday, I was upstairs in the dining room, and he came up and he says, I can’t take this anymore, I’ve got to leave, this is awful. And I said, What? And he said, Well when I sit and I’m so quiet like this, all this stuff comes up, and it makes me really uncomfortable. And I said, I think that’s the purpose of this and it’s okay to be uncomfortable. Why don’t you just take a walk and get some of that nervous energy out? And he went outside and he walked around a bit, and he came back inside and went, I’m going back in. I said I think you’re right, because when you stop interacting with the world, that’s when your stuff comes up. That’s why learning to meditate is so hard. Because you’ve got about 500 things that are percolating just under your consciousness at all times, and as soon as you sit still, they’re all going to perk right up. And you have to let them come; you have to acknowledge them, honor them, pay attention to them, and then let them go. So the first 5 to 15 minutes of meditating is just letting all that stuff fizz up and letting it evaporate. (she meditates) a lot.

I’ve worked in more than 27 industries. My talent is order out of chaos.

I’ve been involved with Toastmasters International since 1974. It helped me to learn to perceive myself as an adult among adults when I was 23. Even though I had been married and had a child, I still felt like a kid. That was where I learned to take my rightful place as a grown up person.