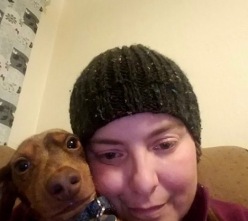 Joscelyn Moburg lives in Colorado, far away from her home state of Illinois. We shared an apartment for the three years that I lived out west, and today, a Monday in June, we are camping at Ansel Watours Campground next to the Poudre River. She currently lives with a housemate in a quaint 2-bedroom ranch in Loveland with her new dog. Joscelyn worked at an assisted living home for ten years. But now she’s doing something a little different.

My job title is caregiver. I have been at this job three years. Before that I worked a little bit outside of direct care, I was more in the office than the direct care that I give currently.

Well a big part of my job is companionship, so I take care of the elderly in their homes. So it’s a job so that people don’t have to go into assisted living or care facilities. They can stay in their own home. I also help with personal care and cooking and just picking up after ourselves. But most of all it’s companionship and encouragement to live well in your elder years and to be okay with having someone help you out. I work 12 hour days but I only have to do three of those a week and I can live fairly comfortably.

There is bathroom care. The woman I work with currently had a stroke so she has left side neglect so we have to help with pulling down the britches and stuff like that and we do help with peri care as well (wiping and keeping clean in your nether regions). Cooking is pretty easy, it’s just the day to day regular stuff. Hamburgers and stuffing and turkey and stuff like that.

It’s very difficult (to work with meat; Joscelyn is a vegetarian) and I’ve been thinking about this a lot recently because the woman I work for is a lover of bacon and she requires bacon every day, sometimes twice a day, and so I have to cook it and it’s crazy because the smell bothers me and the actual idea of what I’m doing bothers me as well because I’m cooking an animal, and I’m against that and it is very difficult. But I’m also commited to taking care of this person to the best of my ability and that includes cooking her favorite foods and so that is one of them, so I have to put some of my beliefs aside and carry on with the duties of the job.

I love getting to know someone to the point where you’re intricately finishing each others’ sentences in a way, and the stories of what they were like when they were my age or what they did when they were little, and I love also the words and sayings of the timeframe in which the woman that I’m taking care of now is from. She’s 85 and she’s lived through some crazy times and it’s pretty interesting to hear. She kind of grew up with nothing and now is very wealthy and it’s interesting to hear some of the stuff. I mean, she worked hard to get where she was, but she also married up, so that comes into play.

It makes me appreciative because the people that I have worked with that are very wealthy are philanthropists as well, and they give and they have good hearts, they’re not like, “look at all my stuff, I only have this kind of stuff and you’re the help.” They don’t treat you like the help; they treat you more like a family member in a way, so it’s a really nice feeling and I’m far away from home so it’s nice to have kind of a second friendship, like family.

I feel like I give a lot of myself and I give that connection and that happiness and a feeling of safety and I get back all of that in return. I get that reciprocation of feeling and it’s rewarding that way and I’ve heard many times, “I want you to take care of me, you do a good job,” and that means the world because most of the people I’ve taken care of through this agency have been very independent people. They don’t like to ask for help, they don’t like to put anybody else out at all, and so in me helping them they’re allowing that and that’s a vulnerable point for them so there’s an intimate bond that forms because of that.

Work is livelihood. But for me work is more about compassion and that feeling of connectedness I’m clearly not at my job because of the money, I’m at my job because it makes me feel like I have a purpose in life and I’m making someone else’s life better. It’s priceless in a way. That type of connection with people that you may not meet in life; you got put together by some chance and now you get to learn everything about them and I think all human life is worthwhile and so I think it’s definitely worthy.

I feel like I accomplish a lot daily in just a relationshop with another human being and assisting with their daily cares. I think that it’s all about perspective. It’s each individual perspective. The president has the most important job? I don’t necessarily feel that. I feel he has an important job but is it more important than mine? No I don’t feel that way. Yeah, for other people it is, but for me personally, I feel like my job is more rewarding and is worth more, I do.

(She’d like to) Run a dog park barkery, like a bakery for dogs. I’d call it Muddy Paws. Or Kai’s Place, I’m not sure (Kai is the dog that she had for ten years, now passed). That’s still a dream, I still have time so it’s still a thought. (There is a small local place) They do cakes and cookies for dogs and some treats, but it’s a very small place. They also do dog wash. I just want a place where humans can get coffee or tea or juice or whatever, and the dogs could get treats that people could take home. And I’d probably have a little retail area with different items that might be cool locally or something like that. That’s been a dream for a long time because I love animals so much, dogs in particular. I really think that would be super fun.